If you're a cult following Branch-Covidian who believes that; COVID-19 isn't just an extra contagious real bad common cold that is on average 99.7% survivable, that will obey your evil overlords and wear the "MASK OF OPPRESSION" or blindly follow the diktats of the evil little elf St. Anthony of Fraud-Xi as well as Marxist politicians & bureaucrats, and then run around in a frenzy trying to get an experimental jab of God knows what... you might want to leave now, `cause I am surely going to commit heresy and offend your ass. Feel free to grovel about in fear elsewhere! 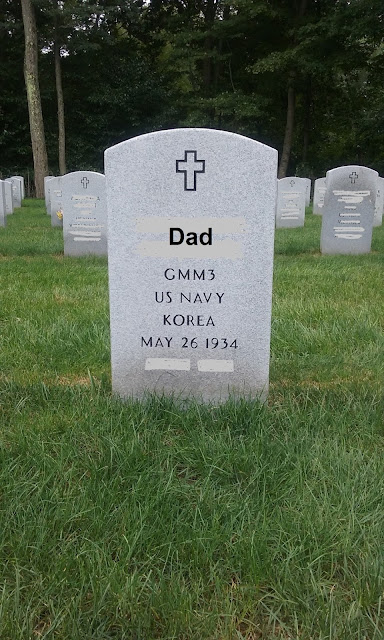 Today would have been Dad's 87th birthday. Only my one aunt that was married to my Dad's younger brother remains from that generation of my grandparent's children. Cousins and spouses that were the offspring of both sets of grandparent's siblings remain.

Dad served on active duty in the US Navy from 1952 until 1956, then in the Naval Reserves until his Honorable Discharge in 1960. In his day GMM3 stood for "Gunners Mate Mounts 3rd Class" where today it is Gunners Mate Missile. Always on aircraft carriers, he operated the 5 inch guns located in exposed tubs on the starboard side aft under the flight deck. He served on three ships; the USS Franklin D. Roosevelt CVA-42 (Midway Class), the USS Bennington CV-20 (Essex Class), and the USS Lake Champlain CV-39 (Essex Class).

He was aboard the USS Bennington when the hydraulic catapults exploded, setting off secondary explosions from the ammunition magazines located underneath. This occurred while cruising off Narragansett Bay on his 20th birthday, May 26, 1954 and put the Bennington out of commission. 103 crewmen were killed, 201 were injured, and the Bennington made it back to Quonset Point, RI under her own power. Because he still had active duty time to serve, he was re-assigned to the Florida based Lake Champlain.

Dad remembered that day until he died even with his dementia (just not all the details). He was on KP that morning, running the potato peeling machine in an aft galley. He felt the explosions and then the fire alarms sounded. When he tried to get to his damage control station which was forward, he was turned back by what he only described as "guards" but I assume that was Marines. He said it was much later on that he was able to go up onto the flight deck, and he said where the explosions happened it was peeled back like it was made of tinfoil. Below is a newsreel video about the disaster.

During his time in the Navy, he was quite the photographer. I have his old cameras; an Argus 35mm and a Zeiss Movikon 8 wind up 8mm movie camera. In the early 1950's he was shooting COLOR standard 8mm movies. I have some great footage from his Navy days of Spain, Greece, and Italy. He filmed his ship under way, a refueling from an oiler, as well as flight operations. He also shot a snowball fight that occurred somewhere under way in the North Atlantic. I also have a great collection of still photos. I used that Argus camera myself until I got my first Minolta 35mm back in the late `80's or early `90's. As an aside, I also found and possess my Mom's old cameras from her younger days, a Kodak Brownie and a Pony 135.

He married my Mom in 1959, they had us kids in the early `60's. He worked his entire career in the printing business, until retirement, which he learned in a trade high school before the Navy. After finding retirement boring, he went back to work as a school bus driver which he loved. He quit doing that at age 70, because the state requires anyone over 70 to get an annual DOT medical exam, but the bus company would only pay for one every two years. He and my Mom took care of my maternal grandparent's until their deaths in 2005 and 2009. My parents hit their 50th wedding anniversary and lived in the same house together since 1963. Mom passed in 2010 and Dad lived as a widowed old guy, doing all the normal old guy stuff until 2016 when he fell and broke a hip. After time in a rehab facility he went back home, and it became apparent that he wasn't quite right. He was diagnosed with dementia and when it got to the point he could not be left alone, he ended up with a live in health aide until his death in 2018. He was buried with full military honors in the same grave already occupied by my mother. Since the caskets are stacked in the vault, the big family joke is Dad will be on top of Mom for all eternity.

So Happy Birthday, Dad... I will raise a glass in your honor later today, and try to head over to the cemetery this Memorial Day Weekend.

Happy Birthday to your Dad, Mine very recently passed away and we will be having the service in June, we had to wait for my brother to return from Astan. Going through my Dads stuff was hard and mentally draining. I was close to him and will miss him but one day I will see him at fiddler Green after St Peter cuts my orders.

I go by Glypto Dropem; a fed up, proud American Patriot living in a rural area surrounded by like minded PATRIOTS in a deep blue bastion of socialism. I AM A STRAIGHT, WHITE, CHRISTIAN MALE AND NOT ASHAMED OF IT! All I want is government at all levels to leave me the FUCK ALONE!! If they don't, then they shall reap what they sow. The same goes for the "cancel culture," for which I now have personal experience. I WILL NOT BE SILENCED, and I hope, someday law enforcement is going to get fed up with chasing phantoms and boogeymen, because little sensitive SJW's can't handle what FREEMEN have to say. I will support law enforcement provided they concentrate on solving crime (because they can't prevent it without violating rights. Ever watch the movie "Minority Report?") and obeying their Oath. When they act like "The Blue Line Gang" they are on their own. My personal Oath of Enlistment, recited on April 12, 1981 at the AFEES in Springfield, MA... HAS NO EXPIRATION!