Take your government jab/mask/distancing/lockdown mandates and cram them up your ass! WE WILL NOT COMPLY (and you all just might die)


If you're a cult following Branch-Covidian who believes that; COVID-19 isn't just an extra contagious real bad common cold that is on average 99.7% survivable, that will obey your evil overlords and wear the "MASK OF OPPRESSION" or blindly follow the diktats of the evil little elf St. Anthony of Fraud-Xi as well as Marxist politicians & bureaucrats, and then run around in a frenzy trying to get an experimental jab of God knows what... you might want to leave now, `cause I am surely going to commit heresy and offend your ass. Feel free to grovel about in fear elsewhere!

This year is the 39th time in a row that my wife and I have attended together. Last year, because of C-O-O-O-O-V-I-D! 😱 the normal fair held at the exposition grounds in West Springfield, MA was turned into a drive through food event only. You drove through in your vehicle and bought your fair food to go. The Log Cabin Restaurant in Holyoke did their "Taste of The Big 'E'" at their own facility on the side of Mt. Tom. My wife and I went with one of my biker buds on motorcycles. We had a nice lunch on their outdoor mountainside terrace overlooking the valley. Afterwards, we took the long way home east through MA and then headed south into Kommiecticut by way of Somers. While not the experience we are used to, I contend our record of attendance is intact.

This year the Big 'E' was happening at the exposition fairgrounds as normal. Well... almost. Right before it started, the city of West Springfield decided to institute a "Mask of Oppression" mandate just for the fair anytime you were inside the buildings. How'd that work out for them? Maybe 50% average compliance. Earlier in the day compliance was higher. We delayed going because it was raining pretty hard in the early morning, and it remained cool and cloudy until mid-morning. My wife wore her thin blue medical mask and I wore my 19th century train robber bandana. The way I wear it, it looks like it is covering my air intake/exhaust, but it is pulled up high on my face and there is almost ZERO restriction that way. It takes some extra fiddling for me to get it that way. In between buildings it was pulled down around my neck. As the morning wore on, the sun came out and by the afternoon it got warm, I just stopped putting my mask back up. So did my wife. So did a lot of other people. And NO ONE MADE A STINK! Outside, only the very few idiotic Branch-Covidians wore a face diaper walking around outside. One libtard ass-clown sitting outside with his wife by themselves on a bench nowhere near anyone were covered up, with their official "Biden-Harris" labeled face diapers virtue signalling all those around them how enlightened and extra special they were. I so wanted to take their photo to turn it into a meme, but they would have seen me and I had no intention of engaging with such morons even to lie to them.

In all the state buildings, we noticed lots of empty exhibitor floor space, and some of the permanent setups closed up with a sign saying "See You in 2022!" While outside in the open areas it was the same. Not as crowded with vendors and purveyors. At the main entrance to The Better Living Center, it is usually full of vendor tents, and 2 to 4 fundraisers raffling off cars and/or motorcycles. Nothing. Open pavement in the whole area. Inside The Better Living Center which is almost 3 acres of indoor exhibitor space is usually cram packed with fair-goers and exhibitors. Not this year. Again lots of open floor space and easy to walk around. Even though we always go on a weekday and it started out rainy, I believe attendance was off. I think it is because instead of a full year of planning like normal, the exposition was in doubt up until it was confirmed to occur a few short months ago. I assume many exhibitors and vendors went and made other commitments.

The Big 'E' has a no weapons policy, enforced by bag searches at the gate and metal detectors. Since I was in MA I was not carrying a firearm. But I sure did have a weapon. I possess a Blackie Collins poly resin serrated straight knife (aka The CIA Letter Opener) with an added para cord wrist loop. I carry that whenever I  have to pass through a metal detector. Airports are a different story, as the knife would get picked up on a full body scanner or x-ray. For those times it is packed in my checked luggage. While bringing a knife to a gunfight is never a good idea, the only guns inside the Big 'E' are hopefully on the hips of the numerous cops on the grounds. 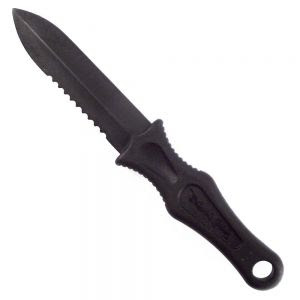 This knife holds a pretty good edge and the serrations are nasty. I wish the handle were just a little more robust and the added wrist loop ensures I don't lose it in a fight. It sure would be a good offensive weapon too, say deployed from behind and jammed into an enemy's brain stem. But I digress.

This year's Big 'E' gives me hope that next year, people will be so fed up with all the BKT that the exposition will be like it always has been, and the wife and I will hit the Big Four-Oh anniversary of attendance.

I haven't been to the Big E in many years. The year my husband and I got together...34 years ago...he stood and watched a guy in the Better Living building show us his "HAND HAMMERED WOK". We must have watched 3 times. We still have and use it and the utensils we bought with it. A GREAT product. I miss the Big E.

I have and carry one of those at times, but have since switched to this from cold steel https://www.amazon.com/gp/product/B000MOM4DU/ref=ppx_yo_dt_b_asin_title_o00_s00?ie=UTF8&psc=1 they make a nice dagger too...

I go by Glypto Dropem; a fed up, proud American Patriot living in a rural area surrounded by like minded PATRIOTS in a deep blue bastion of socialism. I AM A STRAIGHT, WHITE, CHRISTIAN MALE AND NOT ASHAMED OF IT! All I want is government at all levels to leave me the FUCK ALONE!! If they don't, then they shall reap what they sow. The same goes for the "cancel culture," for which I now have personal experience. I WILL NOT BE SILENCED, and I hope, someday law enforcement is going to get fed up with chasing phantoms and boogeymen, because little sensitive SJW's can't handle what FREEMEN have to say. I will support law enforcement provided they concentrate on solving crime (because they can't prevent it without violating rights. Ever watch the movie "Minority Report?") and obeying their Oath. When they act like "The Blue Line Gang" they are on their own. My personal Oath of Enlistment, recited on April 12, 1981 at the AFEES in Springfield, MA... HAS NO EXPIRATION!
The time draws near for decorating lampposts, and trees, and walls with pockmarks mixed with blood spatters. The destroyers of America will only be stopped when we stop them, for TINVOWOOT.