For the fortieth consecutive year in a row,  my wife and I attended the Eastern States Exposition also known as The Big 'E'. While weapons have been forbidden for years, it has been the last few where patrons are forced to walk through metal detectors. Therefore, in order to at least have some type of defensive weapon, I have carried my Blackie Collins poly-carbonate "CIA Letter Opener." 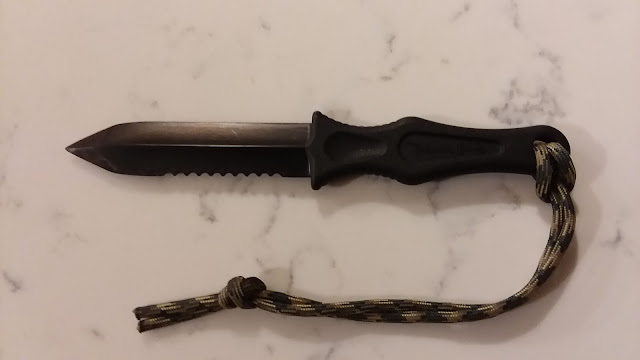 Normally, we go earlier during the fair on a warm sunny day and I am wearing cargo shorts. The blade is easily concealed in my thigh pocket without needing a sheath of any kind. We planned on going on Friday the 30th and the weather was cool and breezy, meaning I would be wearing jeans and needed a way to carry my knife safely and concealed. Whatever I made would have to be completely non-metallic. So this is what I came up with. 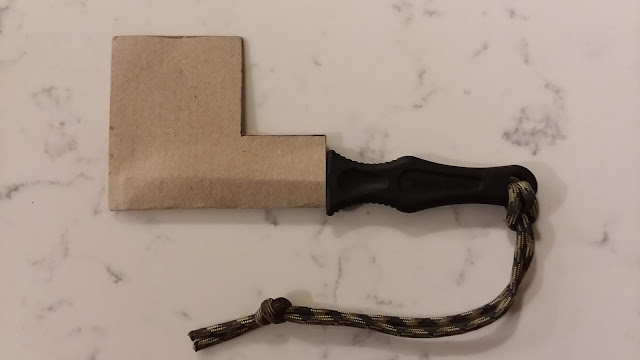 I made a simple pocket sheath out of the heavy cardboard from an old pad of paper. The cardboard was folded along one edge and the two halves were put together with hot glue. The paddle hooks the pocket lining and stays put while the blade is drawn out. To ensure a smooth draw, the serrations were positioned to the fold. It worked like a champ and is surprisingly durable. I went right through the security checkpoint twice that day with no issues. There were no situations that ever called for my blade to come out of hiding.
There were however, a large number of mutants and other assorted human debris wandering around the fairgrounds. It is said that nature adorns toxic and poisonous plants and creatures with vivid colors as a warning to stay away, and it is absolutely the same with the mutants. Blue/green/purple hair, androgynous beings that don't know what they are today, and certain minority women with 4 inch long brightly colored fingernails and stupid long eyelashes. My wife pointed one out to me as she came out of the ladies room, and asked me how I thought she did her post-potty paperwork. I said with a wad of T.P. on the end of a stick I guess.
Later in the afternoon we met up with my wife's brother, his wife, my niece, and friends of theirs that we know. We went to the 7 PM show at the circus. As people file into the tent to take a seat, a clown in a tuxedo named Ronaldo follows them around throwing a boomerang around their heads catching them by surprise. He only communicates with a coaches whistle. Then as it gets closer to showtime, he takes center ring and starts doing tricks with his hat. He tosses it into the audience and wants it tossed back to land on his head. No one seemed to have ever tossed a Frisbee, because the throws were terrible. One woman was so busy trying to video herself she threw his hat into the dirt on the floor. IDIOT! Try putting away your fucking phone and living in the moment for a change. The show was pretty good, a couple of decent illusions, then out came "Anna Dangerous" doing trick shots and marksmanship with a crossbow, and with whips. After her, Ronaldo came back out with a bow and some arrows. He pulled a couple out of the audience to be his volunteers. The husband was placed against a back board and tied into place. The wife was to be Ronaldo's assistant, swishing around all sexy like to hand Ronaldo his arrows. Ronaldo lines up on the husband, and just before he fires, another assistant placed a hood over his head. The assistant that placed the hood stabs an arrow by hand into a target block, the crowd goes wild, and the hood is removed from the husband. So he's thinking Ronaldo hit his target. Now Ronaldo says he is going to shoot two arrows at once. The victim's wife brings him two arrows with drum rim shots with each wiggle of her hips. Ronaldo lines up with two arrows, a hood is placed over the victim's head at the last minute, and the assistant stabs two arrows into target blocks on either side of him. The crowd goes wild and the hood is removed again revealing Ronaldo holding the bow and taking his applause. Now for the finale. He places a balloon between the victim's legs, and let's the victim see Ronaldo put on a blindfold. The hood is placed over the victim's head, the assistant stabs the balloon with the arrow, and just before the hood is removed, the bow is handed to the wife as though she made the shot. When the hood is removed, water shoots out between the victim's legs like he pissed himself and the crowd laughs uproariously. It was a well done gag.
A little more food before the hour plus ride home. My wife and I went to Porky's Pork Palace for a pulled pork "Sundae" to share. Layered like an ice cream sundae, corn bread on the bottom, BBQ baked beans, pulled pork, cole slaw, and topped with a cherry tomato. We left around 8:30 PM so traffic was only a few minutes getting out of the parking lot.
By Glypto Dropem on Monday, October 03, 2022
Email ThisBlogThis!Share to TwitterShare to FacebookShare to Pinterest
Labels: SPEC-OPS

Looks like I need to ad to my stuff. Good idea for sheath.

I tell my kids all the time all we can make are memories. I will tail that with put the damn phone down.