If you're a cult following Branch-Covidian who believes that; COVID-19 isn't just an extra contagious real bad common cold that is on average 99.7% survivable, that will obey your evil overlords and wear the "MASK OF OPPRESSION" or blindly follow the diktats of the evil little elf St. Anthony of Fraud-Chee as well as Marxist politicians & bureaucrats, and then run around in a frenzy trying to get an experimental jab of God knows what... you might want to leave now, `cause I am surely going to commit heresy and offend your ass. Feel free to grovel about in fear elsewhere!

Well, the basement door project came out beautifully, and is now ready for the new storm door. All I need to do is get Wifey to decide which door she wants. She has concerns with the pet door flap. Our friend's dogs refuse to use it on their new EMCO door, and she wants to take our dogs over their house to try it out. I don't think it is as big a deal as she does, but she is in charge of the dogs for the most part, so I relegate all authority to her on those matters. 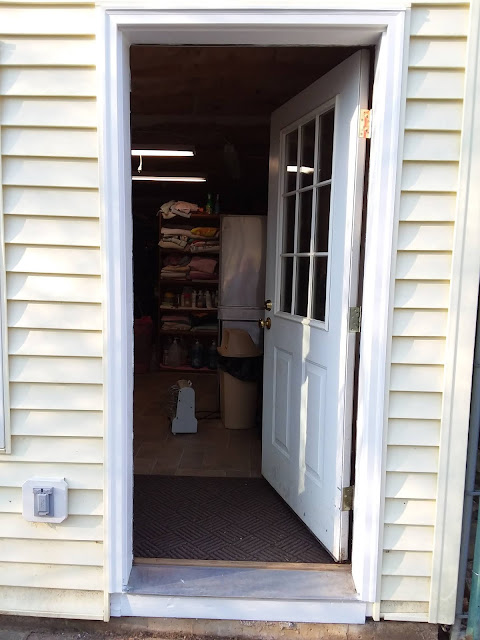 One other thing I realized the builders fucked up on that delayed completion. They did not wrap the Tyvek sheet under the vinyl siding around the opening and into the house. They cut it flush with the edge of the siding. That left the plywood sheathing naked from the edge of the siding to the rough opening. Therefore, I primed and painted the plywood with 2 coats of exterior latex paint to add some extra protection against the elements. The door itself will get a fresh coat of paint after the storm door is installed and it is no longer exposed to the weather.

With that completed for now, it was on to the deck rehab. There were a couple of rotted floor boards, the stairs need repair, and the whole thing needs a pressure wash and water treatment application. I thought about replacing the entire deck floor boards. The deck is 12' x 18'. I need twenty five 5/4 x 6 deck boards 20' long. The thought was if not too pricey to just do it all over instead of piecing it together. Have you priced lumber lately? $50 a board for a total of $1250.00 plus tax before adding screws. YIKES! Just for ha-has, I wondered how much more synthetic decking would be. More than twice the price just for the deck boards, not including screws, mounting hardware, installation tools, screw plugs, etc. Guess it will just be a repair job. The initial haul from the building supply house was $290, and that included $40 for the brickmold to fix the door.

I started by removing and replacing the rotted floor boards. I thought I had screws. It turns out they weren't what I thought they were, they were too short. They were in a plastic bag that I had gotten from my Dad when he passed away. I figured I would grab the screws at Lowe's since I get a military discount there, and it would be an excuse to get out on "The Beast" for the afternoon. I also had a small busted bar clamp from Harbor Freight that required a free replacement, throw in a stop for lunch, hook up with my riding buddy after his doctor appointment, and there you go! $37 at Lowe's for 4 boxes of needed screws.

When I got home I screwed down the new boards and started dismantling the stairs. My wife asked that if the stairs were going to be replaced, could I widen them? Sure, since I had to replace the stringers, I would cut 1 extra and then install longer boards for stair treads and redo the railings. The stairs were in far worse shape than I thought.

I have decided not to reuse the 2 x 2 spindles. I will get all new ones wherever I removed old ones and redo the railing for the steps as well. I will also need to get a short pressure treated 2 x 6 and 2 x 4 for the railing top. Sigh... more money! But it will look nice when done.

Because it rained off and on all day, I worked in the garage to cut the new stringers after my wife left for the day. First thing I had to do, was clean and cover my bike to keep the sawdust off. I got them all cut from one 2 x 12 x 12' board. It was cheaper than buying pre-cut stringers which were about $40+ a piece depending on how many steps.

While working in the garage late this afternoon, I heard some lucky person exercising their 2nd Amendment rights over at my club range. There was a break in the weather for over an hour. It sounded like maybe an M1A to me.

Next up will be to complete the stair demo and get the concrete blocks set to the proper height, as well as put in the additional one. I'll probably go back to the supply house tomorrow for the additional lumber. Its less than 10 miles away, so not a big deal. Below is a photo of the debris pile so far that will need to go to the transfer station (dump). There is also a barrel of small pieces of scrap from cutting of the stringers sitting in the garage that needs to go too. 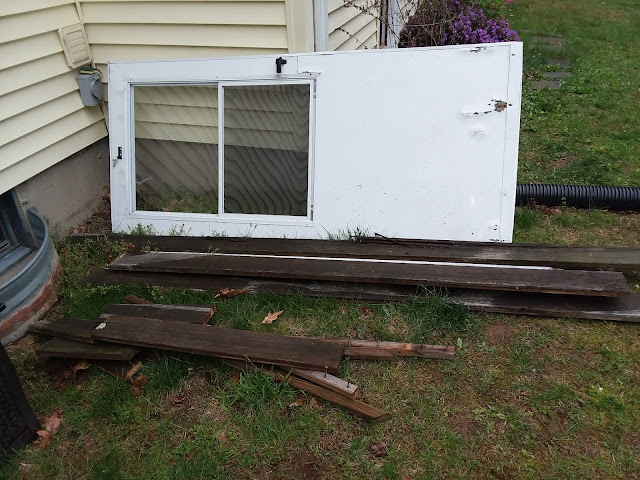 I go by Glypto Dropem; a fed up, proud American Patriot living in a rural area surrounded by like minded PATRIOTS in a deep blue bastion of socialism. All I want is government at all levels to leave me the FUCK ALONE!! If they don't, then they shall reap what they sow. The same goes for the "cancel culture," for which I now have personal experience. I WILL NOT BE SILENCED, and I hope, someday law enforcement is going to get fed up with chasing phantoms and boogeymen, because little sensitive SJW's can't handle what FREEMEN have to say. I will support law enforcement provided they concentrate on solving crime (because they can't prevent it without violating rights. Ever watch the movie "Minority Report?") and obeying their Oath. When they act like "The Blue Line Gang" they are on their own. My personal Oath of Enlistment, recited on April 12, 1981 at the AFEES in Springfield, MA... HAS NO EXPIRATION!