If you're a cult following Branch-Covidian who believes that; COVID-19 isn't just an extra contagious real bad common cold that is on average 99.7% survivable, that will obey your evil overlords and wear the "MASK OF OPPRESSION" or blindly follow the diktats of the evil little elf St. Anthony of Fraud-Chee as well as Marxist politicians & bureaucrats, and then run around in a frenzy trying to get an experimental jab of God knows what... you might want to leave now, `cause I am surely going to commit heresy and offend your ass. Feel free to grovel about in fear elsewhere!

Organized by the Murdercycles MC chapter out of Manchester, CT to benefit the family of Willie Cooper, who was killed on his bike on Friday November 27, 2020. He had just left Rackers Billiards on RT. 83 in Vernon headed home, and 1/2 mile down the road got taken out by a driver that turned left in front of him to go down Thrall Road. He was a Goldwing rider as well, supposedly a pretty red older one in nice condition. A link to the news story from the local NBC affiliate is below.

This was my first group ride and first benefit ride of the season. There were around 40 bikes, of which the majority were the Murdercycles MC members & prospects. $20 per rider and since it was chilly yesterday morning, I was riding solo. Staging was at 09:30 at the commuter lot just off I-84 exit 67 in Vernon. We put rubber to the road at 10:30. The ride went north on RT.31 to RT. 30. One of the Manchester Sunday morning bunch I ride with had his girlfriend snapping photos on the ride. This was approaching the traffic light at RT. 30

Up to RT. 30 east where it turned into RT.74 east into Willington and then north on RT. 320 until it ended and became Turnpike Road. We followed Turnpike Road until we hit RT. 89 in Ashford and headed south to RT. 44. We went west the short distance on RT. 44 until we hit the Xtra Mart/Dunkin' Donuts where we all pulled in for coffee, snacks, and a pee break. The photos below were the two biggest groups of parked bikes and riders. Since there were other customers parked there, some of the other bikes were parked 2 or 3 together. 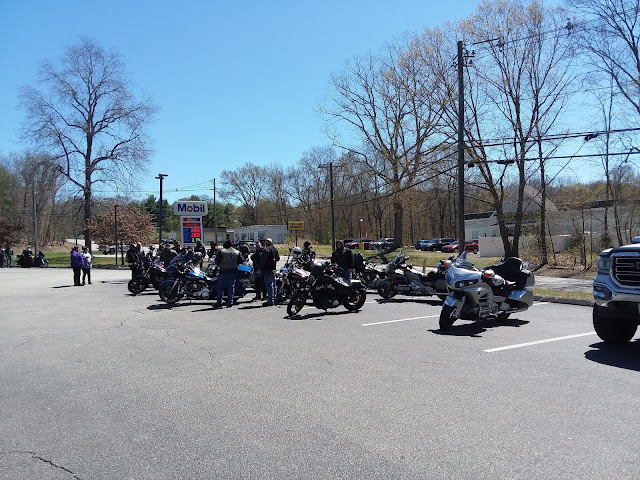 The break was over and we saddled up to head down RT. 44 west. We took it to the split of RT. 6 west and followed that a short distance to the junction of RT. 85, but turned right up Cider Mill Road and then onto Lake Street to head back for Vernon. We crossed RT. 30 at Dobson Road to get out to RT. 83. RT. 83 is two lanes in both directions, and we turned north to head to the accident scene where Willie was killed. We took up both northbound lanes and did a slow ride up to Thrall Road. At Thrall Road was the Harley salute... rev the engine with open pipes. Just ahead on the left was a vacant parking lot directly across from Rackers. That is where we all parked and hung out for a while, with more loud revs and a couple of guys doing smoke shows. The Murdercycles members went across to Rackers, where they were continuing the event with a charity pool tournament. I hung out a little longer and left with everyone else going our separate ways.

On the way home I saw a friends Dad outside doing yard work so I stopped in. I had not seen Rich in well over a year because of Chink Bug cancelling all the events we normally see each other at. I was at his place for over an hour and it was really good to see him. Since my Dad has passed on, I tend to use other peoples Dads as a substitute to talk to older guys of a certain age, even though Rich is probably only 10-15 years older than I am. But he has been around the block a few times.

Email ThisBlogThis!Share to TwitterShare to FacebookShare to Pinterest
Labels: Motorcycles

I go by Glypto Dropem; a fed up, proud American Patriot living in a rural area surrounded by like minded PATRIOTS in a deep blue bastion of socialism. All I want is government at all levels to leave me the FUCK ALONE!! If they don't, then they shall reap what they sow. The same goes for the "cancel culture," for which I now have personal experience. I WILL NOT BE SILENCED, and I hope, someday law enforcement is going to get fed up with chasing phantoms and boogeymen, because little sensitive SJW's can't handle what FREEMEN have to say. I will support law enforcement provided they concentrate on solving crime (because they can't prevent it without violating rights. Ever watch the movie "Minority Report?") and obeying their Oath. When they act like "The Blue Line Gang" they are on their own. My personal Oath of Enlistment, recited on April 12, 1981 at the AFEES in Springfield, MA... HAS NO EXPIRATION!