If you're a cult following Branch-Covidian who believes that; COVID-19 isn't just an extra contagious real bad common cold that is on average 99.7% survivable, that will obey your evil overlords and wear the "MASK OF OPPRESSION" or blindly follow the diktats of the evil little elf St. Anthony of Fraud-Xi as well as Marxist politicians & bureaucrats, and then run around in a frenzy trying to get an experimental jab of God knows what... you might want to leave now, `cause I am surely going to commit heresy and offend your ass. Feel free to grovel about in fear elsewhere!

Progress On The Deck

First let me say I enjoy doing construction. I have many extensive home improvement projects under my belt, most of which I did on my previous house which was an small cape built in 1950. I stripped and refinished the hardwood floors, stripped and replaced the roof, rebuilt the front porch, did the bathroom twice (because the tile we put in the tub the first time did not hold up, and got replaced with acrylic walls), kitchen renovation and expansion (the floor and cabinets were done by contractor, I did everything else), second floor renovation (except the W-W carpet install), stripped and repaired the exterior in preparation for vinyl siding, plus several other smaller projects. In my current house, I built and plumbed my wife's stainless steel dog washing tub, built my chicken coop and pen like you would build a house (which is why it is still there and rock solid after 14 years), did all the demo work when we replaced the 1st floor carpet with bamboo hardwood, and did the demo and plumbing when we put in the quartz kitchen countertops. The reason I don't do it for a living is because I am S-L-O-O-O-O-O-W and would never be able to make money at it. I also don't have an equipped truck full of tools and supplies, so I am constantly having to stop and run out to get what I need.

Tuesday the 3rd, I got the stairs in. It was a royal pain in the ass setting the base concrete blocks for the stringers to rest on. 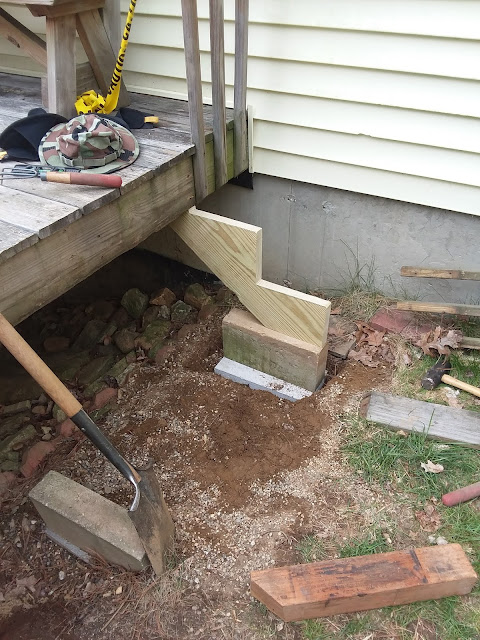 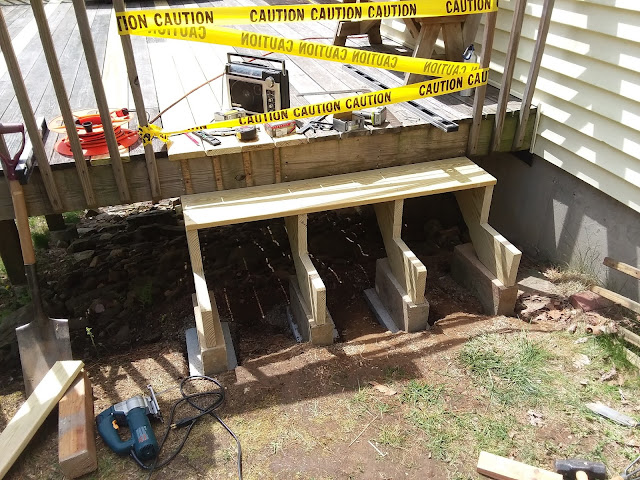 Once the stairs were in I cut back the railing to match where the edge of the new wider steps are. That was it for the day because the bright sun of earlier became clouds and then rain.

Yesterday I worked on the railings, but didn't get too far. Remember when I said I don't have a truck full of everything I need? Yeah. I thought the screws holding the structure together were 3" #10 exterior deck screws. Nope... those are too long and would have poked out the backside of whatever boards I was screwing together. I cut out the two angled 2 x 6 pieces for the stair railings and called it quits to go back to Lowe's to exchange the #10 3" screws I had bought for #10 2 1/2". When I got home I got the left half of the stair railing partially in place, and then my wife called to say she was on her way home from work. QUITTING TIME!! We had one more "Hello Fresh" meal in the fridge so it was my job to get dinner cooked. I not only know my way around a circular saw, but a kitchen as well. Dinner was Beef Bulgogi Meatballs and delicious.

It is an Asian inspired dish. The Bulgogi BBQ Sauce is labeled as Korean, and we like our food spicy so I dumped in the entire packet of Sriracha Sauce for maximum heat. It was quite flavorful and I washed mine down with a Sam Adams Porch Rocker.
Southern New England has been stuck under a stationary front the past couple of days, and the rain has been on and off. Today has been one of those days mostly wet and damp, so no progress until tomorrow. It is supposed to be warm and sunny for just one day, then back to unsettled. I'm not sure how much I will actually get done tomorrow, because I could get a phone call to go for a ride on "The Beast" for which I will have to take action on.
at Wednesday, May 05, 2021

I go by Glypto Dropem; a fed up, proud American Patriot living in a rural area surrounded by like minded PATRIOTS in a deep blue bastion of socialism. I AM A STRAIGHT, WHITE, CHRISTIAN MALE AND NOT ASHAMED OF IT! All I want is government at all levels to leave me the FUCK ALONE!! If they don't, then they shall reap what they sow. The same goes for the "cancel culture," for which I now have personal experience. I WILL NOT BE SILENCED, and I hope, someday law enforcement is going to get fed up with chasing phantoms and boogeymen, because little sensitive SJW's can't handle what FREEMEN have to say. I will support law enforcement provided they concentrate on solving crime (because they can't prevent it without violating rights. Ever watch the movie "Minority Report?") and obeying their Oath. When they act like "The Blue Line Gang" they are on their own. My personal Oath of Enlistment, recited on April 12, 1981 at the AFEES in Springfield, MA... HAS NO EXPIRATION!