The lowering of flags for the victims of mass murders is frivolous stupid virtue signalling and propaganda. Gov. "Jolly" Ned Lamont did it first for the shooting in Monterey Park, and it seems (p)Resident Gopey Dopey Joey Poopy-Pants followed suit today. My flag, however stays up at full height, with my "Times Up" flag (that has a striking, not coiled serpent) below the US Flag. 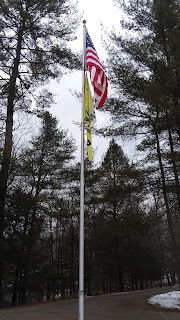 The mass lowering of the flags helps keep the wound fresh and acts as a beacon to the easily swayed that maybe they should give up their own rights to stop the actions of the fucked in the head or violent feral animal.

There are other reasons I refuse to lower my flag on the declaration of a scumbag politician. The death of a foreign dignitary for one, like the recently deceased Queen of England. We won a revolution so I wouldn't have to care, after all.

This blog is a harsh dictatorship, and I am the harsh dictator controlling YOUR freedom of speech. All comments are moderated and must be in 100% ENGLISH. They will be published with the following exceptions: Insults, unintelligible gibberish, SPAM, ads to sell ANYTHING, and comments off topic or that add zero value. I may just post such comments anyway, with a reply pointing out the stupidity and making fun of the author. Comments that contain hyperlinks are allowed, but all links will be checked first. Don't just leave a comment and split, come back later because I respond to some comments and we can have a conversation.

Use the contact form below. Tolland and Windham County CT only, please. Unless you're willing to pay my full travel expenses and time off from work, of course.