Light posting the past week or so. There isn't much to comment on that hasn't been said by me or others already.

Last night right before quitting time, I get a phone call from one of the department members. A deer got struck in front of his house, and the state trooper just put it out of its misery. He didn't want it and wanted to know if I knew anyone that did. I told him to stand by while I made a phone call. The first guy I called didn't answer, but the second guy did. I gave him the address and he said he and his brother were on the way to get it. I called the department member back to relay who was coming to get it and that they were on the way.

My sportsmans club needs venison for the game dinner in April, so that is where it was going to end up. The brothers picking up the carcass are also members of the club. The club has an outdoor area for field dressing and a large walk in cooler for storage. I got to the club first, opening up the house and turning up the heat. I then went out and shoveled snow off the side porch and back deck. For some reason those seem to get forgotten. The guys showed up and we got busy. I am not a hunter, so I had no idea how it was done, but I got a good lesson from a guy that has been doing it for probably 60 years. He made it look easy and because it was a large doe, he was glad to have an extra set of hands. He estimated she was probably 110 pounds. Club officials will be thrilled with the donation. BTW... since I am an EMT and have seen my share of death/blood 'n guts, it did not even phase me. All I could think about was the tasty meal I will be enjoying in April. 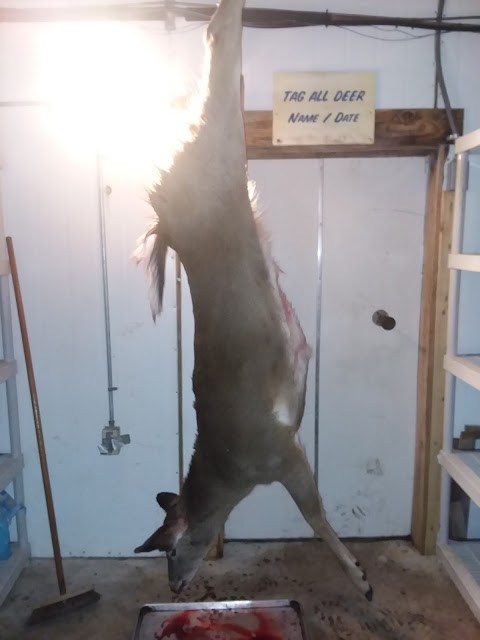 @Bigus Macus: She was, and very healthy. Most of the physical damage was to her back end, and there was a lot of blood in the abdomen. But the intestines stayed intact so no contamination there. I took home the heart and liver so my wife can make dog treats out of them.

Just found your blog. It is good to see another Pissed Off Patriot who can see reality! Thanks for the posts.